Who Am I? Part II

(In a series of articles that attempts to examine the purpose of life, based on our scriptures, this is an introduction to the ‘Adwait’ philosophy of Vedanta)

The Adwait philosophy of Vedanta was fortified in the 8th century by Adi Shankracharya. The foundation of the Vedant philosophy vests on the principle of ‘one-ness’. In this context, Adi Shankaracharya said, ‘Brahma Satya, Jagat Mithya’. It means Brahm/Brahman is the ‘ultimate reality’, the world is an ‘illusion’ or ‘maya’ and ultimately, Jeeva (individual self) and Brahma are one and the same. Mithya does not mean that the world is ‘false’, it means the world is temporary because we can see it and experience it with our sensory organs and mind. But the real self is one which pervades beyond the sensory organs and mind, therefore, the world has been said to be mithya.
If we pause for a minute and ask ourselves, ‘Who Am I’, the probable answer could be a resultant of our parentage, status, designation, address, name etc. We consider these things to be our identity. We never think beyond the physical self or our body and identify ourselves with the body only. Why is there a need to as the question ‘who am I?’? Have we ever thought why we were born as a human? Could there be a purpose behind this or is it simply a chemical/biological process that ends with the end of the body? Is our ‘true self’ beyond the body? If so, how do we ascertain our true self? This is a journey, a quest to answer this question.
At the outset, the answer to this question i.e. ‘Who Am I?’ is ‘I am soul’ and ‘I am Brahma’. As easy as it may seem, the real challenge is to arrive at that realization. That realization is buddhatva, that is moksha. Yog, meditation and different forms of worships are ‘tools’ to reach that realization. Brahma can be seen as an ocean and soul can be seen as a drop of the ocean, that which is a part of the ocean but if separated from it, one thinks that it has a separate existence. This is the ultimate truth, the meaning of Vedanta, i.e. ‘truth as it is’.
In Chapter II of the Bhagwat Gita, Krishna tells Arjun:
na tvevāhaṁ jātu nāsaṁ na tvaṁ neme janādhipāḥ na chaiva na bhaviṣhyāmaḥ sarve vayamataḥ param
न त्वेवाहं जातु नासं न त्वं नेमे जनाधिपाः । न चैव न भविष्यामः सर्वे वयमतः परम्‌ ॥
Never was there a time when I did not exist, nor you, nor all these kings; nor in the future shall any of us cease to be. Krishna indicates at the eternal nature of the soul. He further hints at ‘one-ness’ of all beings as flowing from ‘brahma’.
The real ‘I’ is beyond life and death. When a body dies, the real ‘I’ leaves the body. This separate entity is ‘Aatma’ or the ‘Soul’ which is our real identity. That is the ‘default setting’ of a being, however, on account of agyan one starts identifying one’s self with body and the interests of the body are represented by the sensory organs and mind which constantly strive for physical gratification. When desires become cravings , the deluded person frantically tries to satisfy them by any means – fair or foul. When man identifies himself with Aatma , his aspirations and inclinations naturally begin to follow the righteous path of self discipline , which provides happiness to the Soul.
न जायते म्रियते वा कदाचि न्नायं भूत्वा भविता वा न भूयः। अजो नित्यः शाश्वतोऽयं पुराणो न हन्यते हन्यमाने शरीरे।।2.20।।
Bhagwat Gita 2/20:
The soul is neither born, nor does it ever die; nor having once existed, does it ever cease to be. The soul is without birth, eternal, immortal, and ageless. It is not destroyed when the body is destroyed
Ashtavakra Gita and ‘Tattvabodh’ (of Adi Shankracharya), define the soul as the ‘witness’ of ‘panchbhoot’ or the ‘Five Elements’ that make up a body, i.e., earth, water, fire, air and space. It is said that the soul is neither these five elements, nor is it the body and even the mind. It pervades all and stays as a neutral ‘drishta’ or observer.
To achieve the goal of Brahma or realise the self, Shankaracharya has suggested a four-fold method which is quintessential for a seeker of Vedanta. These are (1) Vivek (Reasoning), (2) Vairagya (Dispassion), (3) Shat Shampati (Six Treasures) viz. Sham (Controlling the mind), Dama (Controlling the senses), Uprati (internal dispassion), Titiksha (endurance), Shraddha (faith) and Samadhan (focus and concentration) and (4) Mumukshatva (Desire to know the truth).

Posted by Vijay Purohit at 2:58 AM No comments:

The Monk who inspired millions! 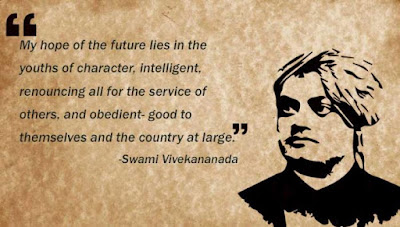 He had uttered these words over a century ago but the strong effect they have can be fathomed and applied in today’s context easily. India has great potential and if its youth can be channelized, it can offer solutions to all the global problems. The problems during Swamiji’s period ware akin to those what we face today, although their form and intensity may vary from those which existed back then. Terrorism, global warming, illiteracy, poverty are some of the broad problems which exist today. Other than these problems a wider range of other problems like depression of various kinds, jealousy, a mad-want for materialistic pleasures, of accumulating and amassing, degradation of values etc. persist. If one reads the works of Swami Vivekananda and his life carefully, one can find all the solutions to these problems. Swamiji used to say, what I’ve done is perhaps sufficient for the coming thousand years. It is about time that we, the young men and women of India, pay heed to Swamiji’s teachings and messages in order to build a strong family, society and nation.  Continuous efforts must be made to remove bad tendencies hiding in the subtle mind. It is absolutely necessary that whatever bad tendencies we find in our actions, thoughts and personality, we gather positive thoughts to counter these tendencies. Eradication of bad thoughts is only possible by current of good thoughts. Only when we are equipped with good thoughts and vision, we will be able to serve others and rise above selfishness.
Swamiji lived for little less than 40 years. He worked tirelessly, ignoring his health, in completing the task assigned to him by his guru. He had foreseen his end long back. To science, his end may seem as something which was brought about by the numerous diseases such as diabetes, asthma etc. he suffered from during his final years. If we try to understand it from a more subtle-spiritual angle, it can be said that his consciousness or chetana had become so huge, that his body was unable to contain it and he had to leave it.
Whatever the case may be, the fulcrum of his life was serving humanity and passing on teachings which will help men become better human beings. Till the very end, he suffered with the sufferings of his fellow beings. In conclusion, it can be said that for generations to come, he will inspire us to grow spiritually, devote ourselves to service of all those in need and eventually service of the nation.
Posted by Vijay Purohit at 11:13 AM No comments: